The Flight of the Turtle 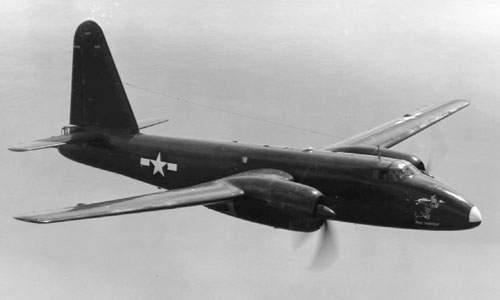 In June of 1946, the Navy’s new patrol aircraft. The P2V-1 Neptune, began rolling off the production line at Lockheed Aircraft Corporation's plant in Burbank, California. Since the Neptune’s production represented a sizeable portion of the Navy's meager peacetime budget, a dramatic demonstration was needed to prove beyond question that the new patrol plane could do the job. In a July memo from Chief of Naval Operations Adm. Chester W. Nimitz to the Secretary of the Navy, James V. Forrestal, Adm. Nimitz suggested the following:

This intended route would exceed the record set by an Army Air Force B-29 Superfortress by some 4,000 miles. The mission would also demonstrate the Neptune's ability to cover the transoceanic distances necessary to perform its ASW and sea-surveillance functions. The message would be unmistakable at home and abroad. The Navy could reach virtually any point on the globe if it chose to do so. 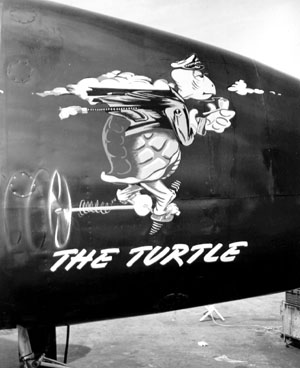 The Turtle would fly with only four men aboard. Cdr. Thomas D. Davies would be the pilot in command, Cdr. E. P. Rankin his copilot, with Cdr. W. S. Reid and LCdr. R. H. Tabeling acting as relief pilots as well as handling navigation and the radios. In early August, the crew arrived in Burbank to provide Lockheed with input for the modification of BuAer 89082, the first P2V-1 off the production line, for the record breaking long distance flight. 89082 was modified by removal of all armament and combat equipment. Cabin heaters and oxygen systems were removed along with radio gear in the aft fuselage. A 370 -gallon oil supply, which included a tank in the nose wheel well, fed 90-gallon nacelle tanks by means of a hand-driven pump on the flight deck. The Turtle, (named after the Lockheed project to study extending the P2V-1’s range, Operation Turtle) was transformed into what could only be described a flying gas tank. In addition to a 2,200-gallon tank fitted into the bomb bay, the Turtle also had tanks in the outer wing panels that held another 1,542 gallons. The tip tanks had a capacity of 400 gallons apiece, an 858-gallon tank went into the new lengthened streamlined nose, and a further 2,082 gallons of gasoline were carried in yet another tank in the rear fuselage. Even the sonobuoy chute was fitted with a tank holding 128 gallons. And lastly, an additional 140 gallons were estimated to be in the network of lines connecting all of these various fuel tanks with the engines, for a grand total of 8,592 gallons, 5,000 gallons more that the normal production P2V-1. In the event of an emergency, the fuel system incorporated a rapid jettison feature: a ten inch diameter aluminum pipe on rollers in the fuselage, which could be coupled to a three way valve leading to the nose, bomb bay and fuselage tanks. The pipe, which poked through the belly aft of the weapons bay, could dump 800 gallons in the first 20 seconds and 5200 in six minutes.

By late summer all preparations had been completed, and Navy crews and Lockheed technicians headed across the Pacific to Australia, set to take advantage of summer’s prevailing tailwinds. Pearce Aerodrome, with its 6,000-foot long runway, would be the takeoff point. When all was ready by September 28th, the Turtle weighed in at 85,575 pounds, nearly 13 tons over its normal takeoff weight. No other twin-engine aircraft had ever lifted that much weight before. When favorable weather forecasts came in, the decision to go was made. It was calculated that a night departure, when the air was cooler, would allow more power for takeoff and less turbulence.

On September 29th, 1946, Cdr. Davies taxied the Turtle to the end of the runway. Since the full fuel load would have exceeded the strength of the landing gear, fueling would not be completed until the Turtle had taxied out to the end of the concrete path and was properly lined up for takeoff. A last minute addition to the crew, a nine-month old gray kangaroo, was to be a gift from Australia to the Washington D.C. zoo.

Slowly the dark blue bomber began rolling down Pearce's runway. Four solid-fuel JATO rockets would provide extra boost during the first few moments. With a burn time of twelve seconds, each JATO bottle developed 1,000 pounds of static thrust to supplement the 2,800 hp the engines would put out at full throttle. The plane rumbled and jounced slightly, as the speed built up. As each 1,000-foot sign went by, Rankin called out the speed. When the airspeed needle touched 105 knots, Davies punched a button jury-wired to his yoke, the JATOs fired from their attachment points aft on the fuselage. With a thousand feet of runway to go the Neptune left the ground and began the climb for altitude. The initial plan was to stay at an altitude of 3,500 feet for the first few hundred miles, burning off fuel and reducing weight so that the climb to cruising altitude would require less gas. But a southwest wind brought turbulence that shook the overloaded Turtle, threatening the integrity of the wings themselves. Cdr. Davies climbed to 6,500 feet, where the air was smoother, reluctantly accepting the sacrifice of enough fuel to fly an extra couple of hundred miles at the other end of the flight.

The weather had deteriorated in the New Guinea area and turbulence was encountered during the crossing of the Australian Outback. Dawn of the second morning found the Turtle over Maro Reef, halfway between Midway and Oahu in the long chain of Hawaiian Islands. In the first voice-radio contact of the flight, Honolulu Radio warned of icing and severe turbulence over Seattle, the Turtle's planned landfall in the United States. Cdr. Davies changed course to hit the coast in northern California, dropped the empty 200-gallon fuel tanks from the wing tips and climbed to 10,000 feet. Forty-four hours and 9,000 miles after takeoff, the sleek sea-blue bomber crossed the California coastline. Lighter now by thousands of pounds due to the gasoline which had been burned, the Turtle once again had to gain altitude to clear the Sierras, and then the even more formidable Rockies. The weather was against them once more, with rain, sleet, and snow battering the plane. Climbing to clear the Rockies, the Turtle began to ice up severely, deicing equipment not having been installed. Descending into warmer air to shed the ice was impossible, so the only way the crew could maintain altitude was to run at ever-higher power settings, bulling along by sheer brute force using up even more fuel.

The weather finally broke with the dawn of the Turtle's third day in the air, and all morning Cdr. Davies followed the section lines of the plains states eastward. Nebraska, Iowa, and the Missouri and the Mississippi rivers slid past below. To the north, the haze of Chicago was in sight. Fuel was becoming a problem. The bomb bay tanks, the nose tank, and the big fuselage tanks were empty. The fuel gauges for the wing tanks were moving inexorably toward zero. Davies and his crew concluded they could not safely stretch the flight beyond Columbus, Ohio. The struggle with the weather had cost the Turtle too much fuel. Eleven hours and eighteen minutes after crossing the coast Cdr. Davies and his exhausted crew set the Turtle down on the runway at NAS Columbus, Ohio. The date was October 1st, and they'd been in the air for two and a half days, covering 11,236.6 miles in fifty-five hours, eighteen minutes. The Turtle’s distance record would stand for sixteen years, until January 10th, 1962 when a Strategic Air Command B-52H flew 12,519 miles nonstop and un-refueled from Kadena Air Base, Okinawa to Madrid, Spain in 21 hours and 52 minutes. However, the Turtle’s record still stands as a Class C, Group I (Airplanes with piston engines) record and it is unlikely that it will ever be broken.

After a well-earned publicity tour, the Turtle was used by the NATC at Patuxent River as a flying test bed for advanced avionics systems and eventually returned to standard configuration. The Turtle was retired with honors in 1953 and put on display in Norfolk, Virginia. It was moved again to the naval air station in 1968. The Turtle began its final journey on 2 March 1977 when it was towed from its display area to NAS Norfolk's transit area, its wings carefully removed and crated, and then loaded aboard a barge for transport to the Naval Aviation Museum in Pensacola, Florida where it rests today.